Both plant species and genotypes within a species vary in the severity of disease
symptoms, perhaps due to differences in tolerance (ability of the plant to recover after infection), susceptibility (probability of infection when exposed to the pathogen) or resistance (ability of the plant to defend against infection). Association with other microbes such as mutualists may induce phenotypic changes in plants that alter the intensity, outcome and even the symbiotic state (mutualistic, parasitic, or commensal) of an association (Rúa & Umbanhowar, 2015, Theoretical Ecology). Furthermore, plant pathogens and mutualists may modify plant nutrient allocation in response to abiotic environmental changes (Rúa et al. 2011 Current Opinion in Virology, Rúa & Umbanhowar, 2015, Theoretical Ecology).

My work indicates that the type of mutualistic 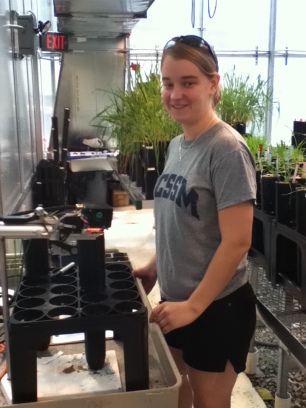 relationship is important for determining plant response to pathogen infection:

Further collaborative work with other members of the Mitchell lab at UNC-Chapel Hill indicates that direct amendments to host nutritional status lead to increases in viral titer across a number of host species (Cronin et al. 2014 American Naturalist), and produced an undergraduate honors thesis demonstrating increased titer for hosts across a gradient of nutrient values (Whitaker et al. 2015 New Phytologist).